Lessons from the Dojo 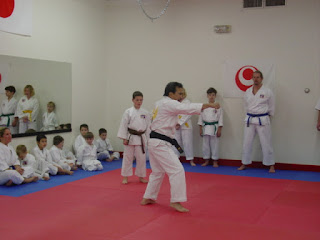 A while back, I decided to find out about the sport of karate by way of my brother-in-law’s karate dojo (school). The first day of class was quite the eye-opener. Everyone seemed to know what to do, drills went off without a hitch (except for me), an eight year old came at me with fists flying, all in the name of practice of course, and in the middle of a lesson on kicking from another young student, the kid dropped and did ten quick, perfectly-formed push-ups…it was punishment for doing the exercise wrong and he had, to my surprise, doled out his own punishment.
Discipline, respect, excellence…all of these areas were repeatedly demonstrated during my weeks of class. My question was how? How do you get a room full of kids (and adults) to build confidence, accept discipline, give and receive respect, and strive for excellence while at the same time allowing them to have fun and build skills that they will use for the rest of their lives? The answer, from my fifth degree back belt brother-in-law and karate school master, includes the following points.


All of these lessons are applicable whether you are using them in your home, in your business, or with your team. The basics of practice, respect, discipline, and communication work no matter what lessons you are trying to instill.

Posted by Code Name Insight at 7:18 AM