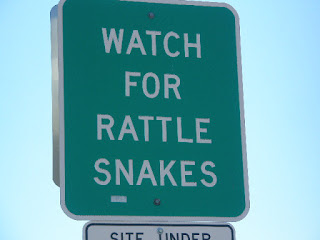 I recently returned from a week-long conference. After the spouse got tired of staking out real estate by the pool, it was time for a run. My only comments as I headed off to another conference session were to use sunscreen since the sun in the desert was much more intense than where we live, to take a bottle of water since the dry, windy climate could lead more quickly to dehydration, and to watch out for rattle snakes. “Watch out for what???” If I recall correctly it was a quick run.

It is important to know what the local hazards are whether you are on vacation, recently moved to a new area, or are temporarily assigned to a new location. Since each location has its own inherent hazards, it is a good idea to know what they are before you get there (or as soon after arrival as possible). It’s a good bet that the hazards where you live are barely a blip on your radar since you are used to taking precautions for them, however when we relocate, everything is new, including possible physical, social, biological or other hazards. Also, hazards may be location specific, seasonal, or location specific and seasonal. Here’s a number of hazards that may be common in one area and unknown in others:


The bottom line is to take a bit of time whenever you find yourself in a new location. Assess the situation, make a note of anything that may impede your safety, and take steps to protect yourself.