A Warning for Parents of Teens 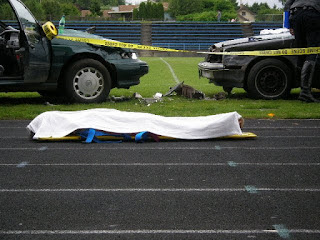 Our local high school held its annual "Mock Crash" today. This event simulates a fatality crash caused by teens drinking and driving. While I have seen other staged crashes that had more of an emotional impact (maybe it was less intense due to the sheer number of 1500+ kids attending or maybe they are so hyped up about graduation that they didn't fully pay attention), the message is nonetheless, important for all parents as well as teens:


The bottom line is that teens need to be protected. I have seen too many parents devastated by the death of a child who was a vibrant, active and an integral part of a family and community one minute then dead the next. It is a tragedy that parents, and families, never recover from.