The Five Levels of Personal Protection 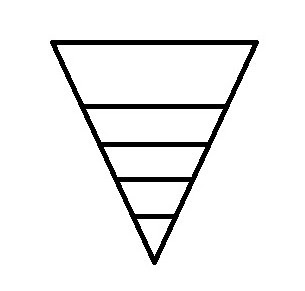 Imagine this pyramid represents your five levels of personal protection...

Level 1 (the widest part) includes all of the basic things you can do to insure your own safety without any physical confrontation. This includes but is not limited to: being aware of your environment, not putting yourself into a situation/place that is likely to be dangerous, staying away from known drug and gang areas, going with a buddy if you are unsure of the place you are going to, staying in areas where there are people/not putting yourself in a secluded area alone, and taking the everyday common sense steps that most of us take to ensure our personal safety (locking doors, closing and locking windows at night, etc).
Level 2 includes a minimal level of confrontation with a potential assailant. If you are feeling threatened this would include verbally confronting the person, yelling and causing a commotion to bring attention to the situation, acting like a lunatic to divert their attention, running away, hiding from an assailant, and calling 911 for help.
Level 3 includes the judicious use of non-lethal weapons. Everything from spraying the attacker with Mace to using a stun gun (I don't recommend these as they can be easily taken away and used on you) to throwing rocks at them to grabbing whatever other type of item you can use as a weapon to get them to think better of attacking you and/or to give yourself the opportunity to break away from them and escape.
Level 4 includes a full-on physical confrontation with the attacker. Preferably you will have the skill of a martial artist and the swift and utterly overwhelming reaction of a UFC contender. Even an unskilled, much smaller and weaker person, when put into a situation where there is no option but to fight, can react in a way as to, if not overtake the attacker, at least make them think twice about making you their target. In this situation, which is just a notch below a lethal level of force, there are no gentlemanly fighting rules. Everything is allowed and the more painful and shocking, the better. Pulling hair, gouging eyes, bashing kneecaps, or twisting a big handful of ballsack are just a few of the techniques that can get their attention, temporarily disable them, and give you critical moments to escape.
Level 5 (the narrow, pointy part of our pyramid) is all about deadly force. This is least often used, and should only be done in a life or death situation. This situation will most likely end up with someone's life being taken and it should be the other guy's, not yours. Although this could include a blunt weapon like a baseball bat or a knife (both options are much less favorable than a firearm--you don't want the assailant to be within arms length of you if at all possible), most often this type of situation will result in the use of a firearm. In this case you need to know that your life or the life of someone else is in grave danger (ie: the assailant has a firearm as well or you are clearly outnumbered and there is no doubt about the attacker's intentions). While having a gun puts you at this level, it is absolutely critical that you learn specifically about using a firearm for self defense from a skilled instructor (such as being aware of what is behind the assailant you will be shooting at, that trying to "wing"someone is a stupid idea, and that marksmanship under stress is something that needs to be practiced).
Fortunately for most people, the simple Level 1 precautions are enough to see us safely home 99% of the time, however it is still necessary to consider the other four levels of personal protection AND prepare for these levels just in case.
Posted by Code Name Insight at 7:55 AM